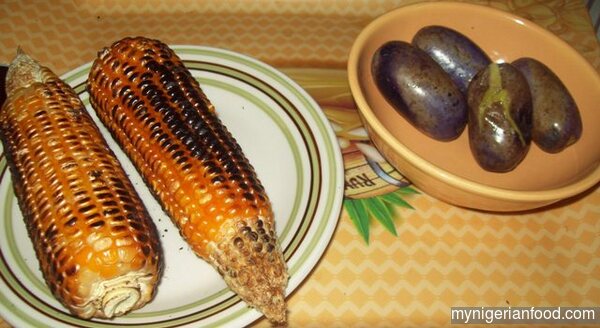 As a child, I remember my mother cooked all sorts with whatever she could lay her hands on. We had a little farm at the back of the house where we always planted cassava, yams, corn, waterleaf, pumpkin and sweet potato. She had some corn recipes I wasn't particularly excited about but we are not allowed to reject food in the house. Some of the corn recipes were 'Ekoki' and 'Asa' which I never liked and then there was also boiled or roated corn with boiled or roasted pear which seems to be a delicacy but I only enjoyed once in a while.

Ekoki is corn that is ground and prepared like Moin Moin while Asa is corn that is grated and kind of prepared like Ekpang. Corn hardly ever crosses my mind except when I buy sweet corn to garnish some of my dishes but this weekend I bought some roast corn down my street and some raw pear. I soaked the pear in boiling water for about 8mins as usual and brought them out. This was my dinner and it certainly brought back memories