How To Prevent Fruits From Browning 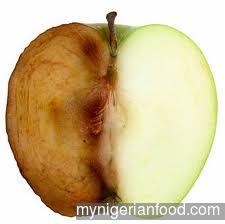 A user on Mama's Dish asked a question inquiring about how to prevent bananas from browning when used in fruit salad.

First, we might want to know what causes fruits likes apples, bananas, pears, etc. to get brown when they are cut and the insides exposed to air.

Apples and other produce (e.g., pears, bananas, peaches, potatoes) contain an enzyme (called polyphenol oxidase or tyrosinase) that reacts with oxygen and iron-containing phenols that are also found in the apple. The oxidation reaction basically forms a sort of rust on the surface of the fruit. You see the browning when the fruit is cut or bruised because these actions damage the cells in the fruit, allowing oxygen in the air to react with the enzyme and other chemicals.

I know that is a lot of uncommon jargon, but basically you get the point - when the fruit is cut open it react with the oxygen in the air and gets that rust coloured look or in layman terms, it gets brown!

So how can you not serve rusty coloured fruit? There are a number of ways to slow down the process of oxidation long enough for you to use your desired fruit as a salad or snack or just to make another meal look or taste better.

Here are a couple of the ways you can stop or prevent the browning of fruit.

1. Soak them in a bowl of cold salt water for 3-5 minutes. Not too much salt, or it effects the taste of the fruit. Dissolve 1/2 teaspoon of salt per 1 quart (4 cups) of water.

2. Soak them in a bowl of cold lemon water for 3-5 minutes. Mix 1 tablespoon of lemon juice per 1 cup of water.

3.  Brush them with juice from citrus fruits such as lemons, limes, oranges, and grapefruit.

4. Soak them in a bowl of Sprite, 7-Up, or a similar lemon-lime, carbonated soda for 3-5 minutes.

5. Crush a 500 mg tablet of vitamin C and let it dissolve in 1 gallon of water before adding sliced fruit. Ascorbic acid, a component in vitamin C, will stop oxidation from occurring. This method is a good choice when you are slicing large amounts of fruit, as it will not affect taste.

Now you don't have to worry about how the fruits in that fruit salad will look, just go ahead and slice 'em up. ;)

Which of these methods would you rather go for? Do you know any other methods? How do you prevent your fruits from browning?